An efficient infrastructure is needed to channel visitors and residents into car parks. Working with a parking operator who has the expertise and experience to coordinate with multiple project developers is a huge plus.
Share

Multiple parties are often involved in concurrent developments in a small urban area.

This is certainly the case in an area known as the Rijnhaven district in Rotterdam, which includes both Katendrecht as well as the Wilhelminapier.

Multiple parties are often involved in concurrent developments in a small urban area.

This is certainly the case in an area known as the Rijnhaven district in Rotterdam, which includes both Katendrecht as well as the Wilhelminapier.

Thanks to city planning and inspirational developments it has become one of the hippest districts in Rotterdam, combining much needed new housing, outdoor space and liveability. The complete makeover of this area started at the dawn of the new millennium and is not yet complete.

However, the area is already bustling with life and has many new entrepreneurs who mainly fit in with the 'culinary, creative and cultural' concept. Residents are attracted by the luxury apartments, proximity to water as well as the views and vistas, visitors are attracted to the many bars and restaurants, the cinema and by the frequent cultural events. 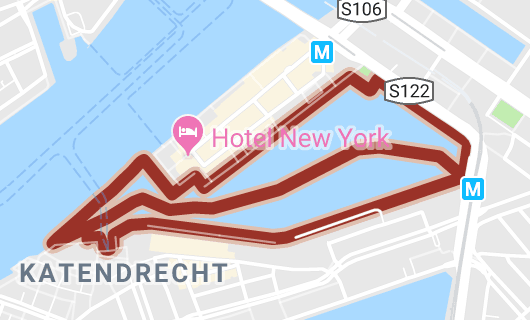 An efficient infrastructure is needed to channel visitors and residential traffic into car parking facilities above and below ground. Having a parking operator in place who has the expertise and experience to coordinate with multiple project developers to realise effective parking solutions is a huge plus when you need to:

Q-Park is already involved in this district and operates a number of parking facilities in the area (De Rotterdam, Boston & Seattle and the Maastoren). Good reason, therefore, to engage with project developers and local authorities to provide smart parking infrastructure for projects in the pipeline.

To serve the Bay House, Stilwerk and Jumbo

In the new plans, the car park must serve the Bay House residents and hotel guests, the Stilwerk Designcenter visitors and the Jumbo Foodmarket shoppers. The plans also retain the character of the area including the historical Santos coffeehouse and a beautiful tree-lined avenue, as requested by the municipality.

Q-Park and the various project developers have joined forces and combined the required parking capacity for all these new developments into one facility with one access and exit point, rather than create individual car parks.

This means less capital expenses and construction time, and that the tree-lined avenue: 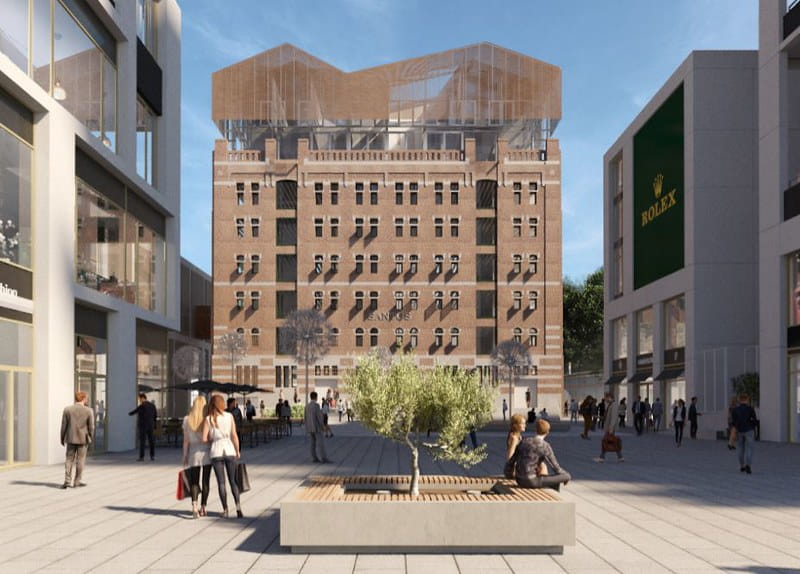 The historic Santos coffee warehouse, a Katendrecht landmark and national monument is being redeveloped into a design centre.

Stilwerk, the German design department store wants to house 20 design shops in this listed building and will create 22 luxury penthouse apartments on the roof. 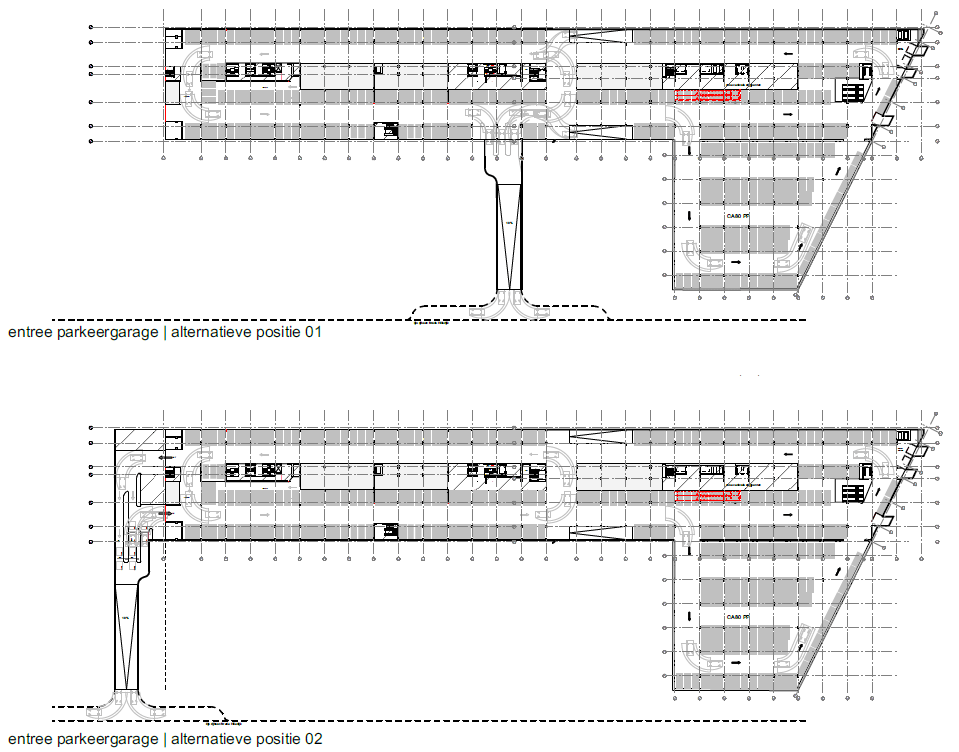 The new plans for the two-level underground car park consider two options for a single access/exit point, focussing on an efficient infrastructure and realising effective parking for a multitude of functions.

The additional parking capacity on the right will serve Jumbo and Stilwerk. An underground pedestrian walkway with travellator will be constructed so shoppers do not have to cross the busy street.

Combining parking for The Sax and Boston & Seattle

Opposite Bay House and on the other side of the Rijnhaven basin two additional residential towers, Havana & Philadelphia, are planned to complete developments on the southern side of the Wilhelminapier. 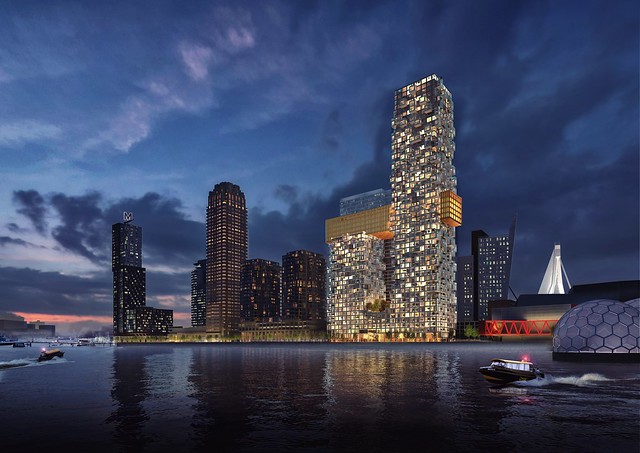 Artist impression of The Sax

One tower will be about half the height of the other and from a distance these will resemble a saxophone, hence the name – The Sax.

The structures will be built between the New Luxor theatre and the Boston & Seattle complex. Boston & Seattle and Havana & Philadelphia will have a combined car park with one access and exit point. This design is a win-win all round, the street infrastructure remains clear and simple and there is easy access and ample capacity in one optimised parking facility – a solution that saves construction time, money and the environment. Furthermore, this solution will have the least impact on traffic flow in the area.

The Sax parking facility will have three underground levels, the lowest exclusive to residents and two for the general public. Access will be linked to the existing Boston & Seattle car park, so the facilities will not only share the access and exit, but also barrier and payment equipment.

Residents will be encouraged to use the lowest level as lifts from this part of the car park will take them directly to the residential levels above. For security reasons, the lifts and stairways publicly accessible at ground level will not provide access to the residents parking level or the apartments. 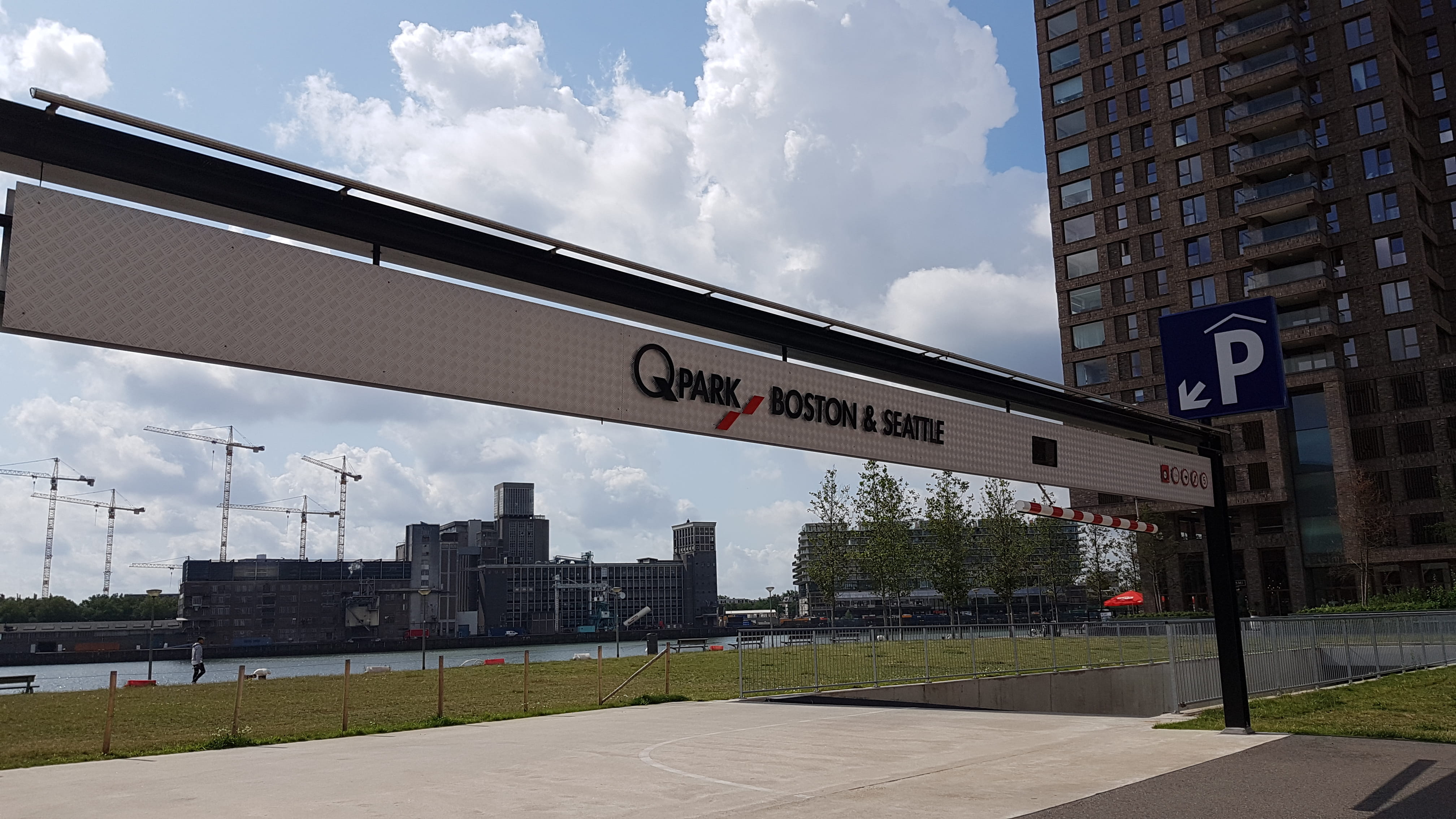 In 1923 when the Fenix warehouse opened its doors on Katendrecht, it was the largest warehouse in the world. During World War II the dock was destroyed which severed the warehouse in two. Reconstruction began in 1950 which was when the complex was given its current name. Now, more than 60 years later, the warehouse is being repurposed. 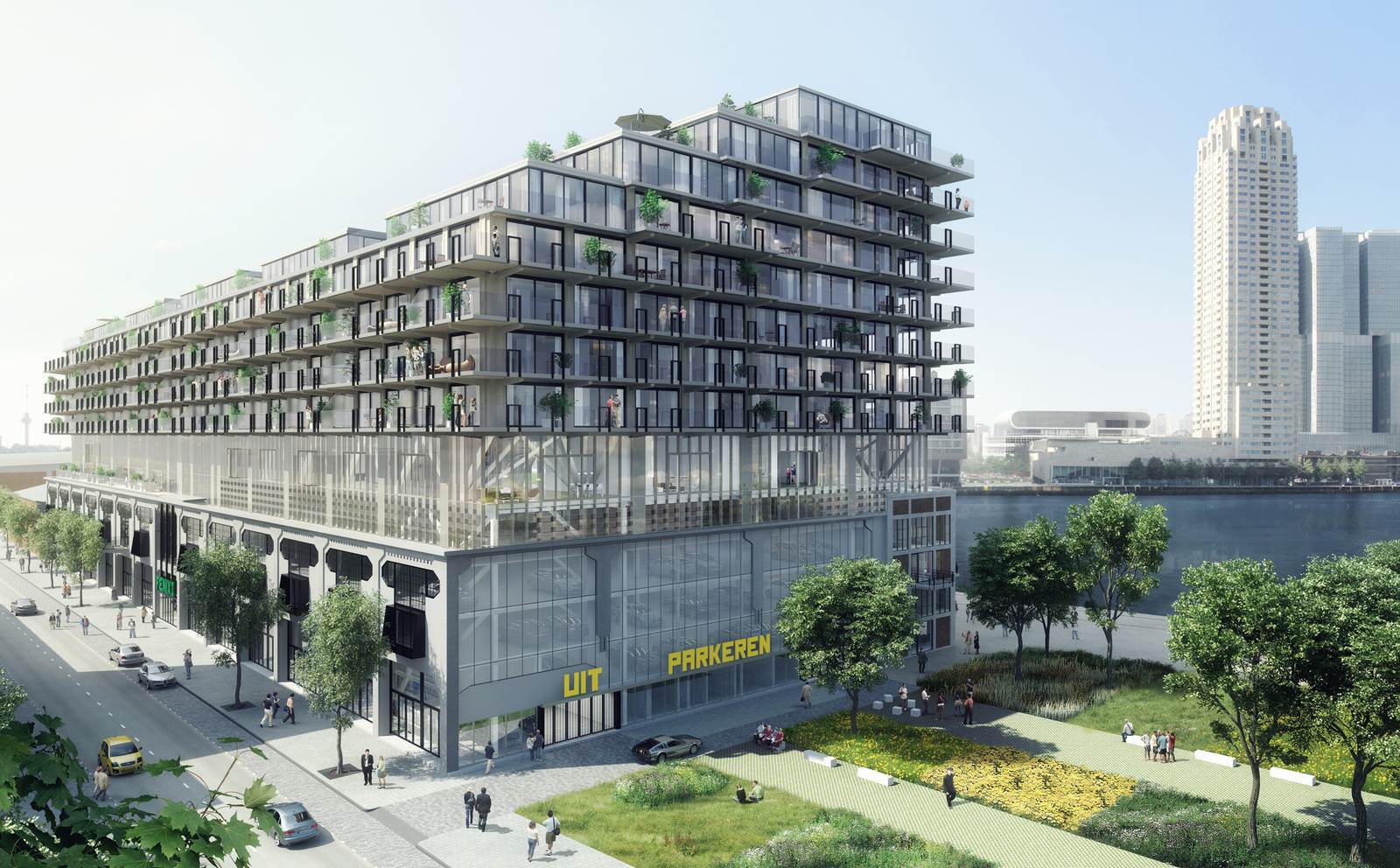 Artist impression of Fenix I 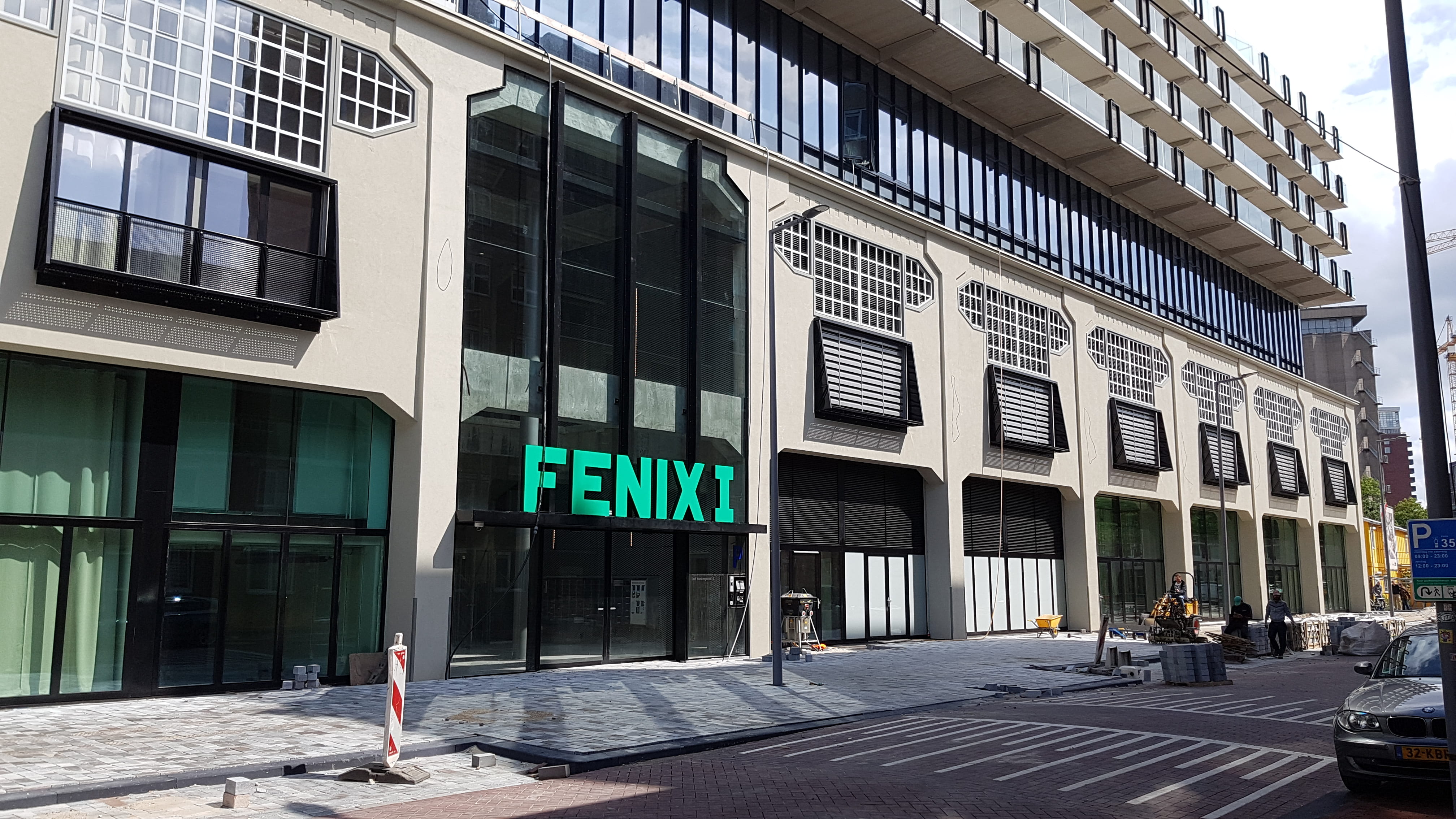 Retained facade of Fenix I

In Greek mythology, a phoenix (Old English fenix) is a long-lived bird that cyclically regenerates or is otherwise born again, (source Wikipedia). An apartment complex has been placed on top of the original warehouse structure, while retaining the warehouse facade. Fenix I has shops and public amenities at street level and luxury apartments on the upper floors. Parking for residents and visitors has been created above ground within the existing structure on four levels.