What to do in Brussels

Brussels is an exceptional city with an interesting mix of business destinations, hotels, unique museums and interesting buildings. What’s more, it’s the perfect place to start for a weekend away or a short business trip.

In the southern part of Brussels you will find several magnificent and amazing museums: from art nouveau and modern art (Horticultural Museum, Art & Marges) to the surrealistic Museum of Fantastic Art. Here you will also find several important cultural and historical sites, such as the Belgian National museum of the Resistance, the Orthodox Church Museum as well as the Cantillon Brewery and Brussels Museum of the Gueuze. And don’t miss the Meunier Museum.

You will find many interesting buildings as you walk around the area. One to look out for is the Halle Gate that was once part of the old city wall of Brussels and which now houses the Halle Gate museum. A little further south, just outside the old city wall, is St Gilles' Church. This church was destroyed in 1578 by the local residents themselves to prevent Spanish troops from using the complex in a siege. The church has subsequently been rebuilt and damaged again several times. The church as it is today is characterised by a mix of Romanesque and Gothic elements. Together these are known as the Eclectic style.

If you walk northwards from Halle Gate, you will find yourself in Marolles/Marollen, a former working-class district. Its name is derived from the Maria Colentes convent where lepers were exiled in the Middle Ages. The nuns were called Maricolls/Maricollen, which later degenerated into Marolles/Marollen. There is a flee market every day at Place du Jeu de Balle/Vossenplein. From the other end of this district, you can reach the Palais de Justice/Justitiepaleis via a lift that will take you 20 metres up to the Place Poelaert/Poelaertplein. This enormous, imposing court building with a massive dome is surrounded by columns, and visitors can freely access part of the impressive interior. Take a look inside and wander along the pompous corridors and grand staircases. Don’t forget to look up to admire the domes and art works. 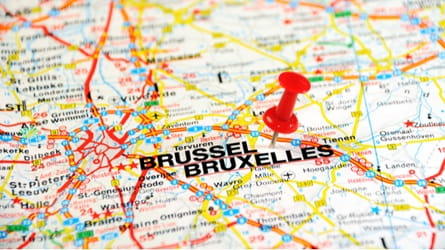 How does it work?

This website uses cookies for various purposes, including analysing traffic and improving the website. By clicking “I agree”, you agree to cookies being stored on your device to enhance site navigation, analyse site usage, and assist us in our marketing efforts. If you would like more information about these cookies, please click here for more information. View details
Only necessary
Only necessary